Career, Eric Jones
Quick Navigation
Spotlight: The Magic of Eric Jones
Who is Eric Jones?
What He Does
Get Schooled - Lessons and Lectures from Eric Jones
Academy of Magical Arts
Where You May Have Seen Him
A Man to Watch

Spotlight: The Magic of Eric Jones

Eric Jones is an American magician who’s been performing magic professionally for several years. A flurry of television appearances increased his name recognition outside the magic community.

Who is Eric Jones?

Eric is a magician based in Philadelphia, Pennsylvania. Working in the insurance industry and practicing magic as a side job, Eric got into the field full time in 2011 as Director of Product Development at Ellusionist. After a couple of years with Ellusionist, he moved on to a short stint at Murphy’s Magic Supplies from 2013 to 2014 before co-founding his own magic company, Lost Art Magic, in 2015.

He is the creator of numerous magic tricks and techniques with several products available on the magic market. In addition to performing all over the world, Eric also lectures to other professionals in the field and consults on magic tricks for various productions including television, movies, and stage performances. 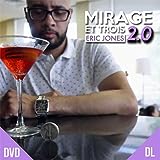 Eric Jones is a close-up magic specialist and creator. He’s known for being good with both cards and coins while many sleights of hand artists are typically only good with one or the other.

Eric has created numerous original tricks. Combinations of original and classic sleights that make for a completely new effect. He’s also created or co-created several gimmicks. The magic industry term for an item created for use in an illusion that has been altered in some way to enhance the effect or is an accessory to help a magician perform an illusion.

Here are some products Jones produces to help aspiring magicians.

Get Schooled - Lessons and Lectures from Eric Jones

Eric Jones is a professional magician. Professionals innovate, then pass that knowledge to others.

Here are a some of Eric Jones’ many educational programs.

Mirage Et Trois – Created by Eric Jones in 2004, this is a coin routine made up of three separate tricks, Out with Three, S.V.C.A. (Spectator’s Visible Coins Across), and Three Klan Vanish. Since 2004 Eric has refined and improved the routine and released a new version known as Mirage Et Trois 2.0.

Evanesce – An impromptu coin vanish that is so smooth it can, theoretically, be performed in the nude.

Harlequin – A gimmick-less variation on a sandwich card trick that can be done with any deck.

Liberty: Fingertips Part II – This is a set of illusions designed to allow the performer to work with a crowd viewing the tricks from any angle. Liberty includes both a card and coin sleights and numerous original tricks like 2Coinz, Surrogate, Visual Oil and Water, New Era, and others.

Metal 2: Commanding Coin Magic offers 8 more routines. It also includes performance advice for magicians who want to move out of the amateur arena on issues like pacing, blocking, redirection, and looking natural.

Metal 3: Gaffed Coin Magic is a lesson in the up-close use of trick or gaff coins. Eric teaches 8 gaffed coin routines that include principles that can be used with standard coin magic, too.

BioBender – The BioBender is a modular thumb tip gimmick that allows the user to bend metal in real-time using items that haven’t been prepared in advance.

The Gaff System – Eric co-created The Gaff System with fellow magicians Callen Morelli and Daniel Morelli. The system was commissioned by Ellusion and Artifice and includes the 54-card Artifice Gaff Deck and two DVDs that teach users a total of fifteen tricks using the gaffed deck in combination with one or more of three Artifice decks. On the DVDs, Eric teaches users four tricks called Hoarders, Side Effect, On Point, and Morph.

Eric has also been a featured performer at the Academy’s famed Magic Castle club and restaurant in Hollywood, California several times in the past decade.

Where You May Have Seen Him

Wizard Wars was a competitive reality show for magicians that ran for a season and a half on America’s SyFy network. Judges were magicians Penn & Teller, magician and magic critic Christen Gerhart, and 2003 Grand Prix World Champion of Magic Jason Latimer. There was also a 4-person panel of in-house magicians that performed for the audience each episode. Each episode four outside magicians were paired off and given random objects to put together a short act.

During the first part of the show, two teams of challengers would compete against each other. The winning team would then compete with a pair of the “wizards,” the show’s in-house team of magicians. If the outside magicians won, they would take home a $10,000 prize. One of the best aspects of this show was that it highlighted performers who were big in the magic community but not necessarily well-known to the public.

Eric Jones appeared on season one, episode twelve of the show.

He was partnered with Joshua Messado, a linking ring specialist also from Philadelphia. The pair won the initial round of the show with their easy banter and traveling coin tricks utilizing a hula hoop, a piggy bank, and a plastic flamingo. They were subsequently defeated by the wizards in a fishing themed round complete with hip waders, tackle box, and a large submarine sandwich.

The judges indicated that the main reason the Philadelphia duo lost was that their routine had a lot of open time with not enough interaction between the illusions. There was a prop failure during the act as well, though the duo performed through it. The panel of judges commended them on their professionalism.

Famous magicians Penn and Tell challenged other magicians to fool them by performing their tricks so well that the duo couldn’t tell how it was done. This show was originally conceived in the UK by British network ITV and filmed in London. It recently aired its fifth season in the summer of 2018. By the time Eric Jones was on the show, during Episode 11 of Season 2, the show was filming at the Penn and Teller Theater in the Rio Casino in Las Vegas, Nevada.

Penn and Teller, in a rare move for the show, suspected they knew how the trick was done but wasn’t sure. They ended up asking for a final call from one of their producers, someone who knew both how they thought it was done and how the magician accomplished his trick.

Penn and Teller only guessed a small portion of the act’s total illusions, and their producer declared that Eric had fooled them. Eric Jones walked away with a trophy and a great resume line. He could now say he’d fooled Penn and Teller.

The Next Great Magician was a limited, 6-episode reality television series that aired on the UK’s ITV network in 2016. The premise was 6 magicians each episode competed for a spot in the finale.

The real twist on this show was that the performers themselves gave numeric scores to each other’s acts. The winner of each episode, including the finale, was whoever had the highest cumulative score from their peers. The winner of the finale would go on to receive a solo show from the network.

Eric Jones performed on the first episode of series. He was competing against 2 escape artists, Jonathan Goodwin and Ines Magi and another sleight of hand artist, Jordan Gomez, who worked with larger objects.

Moreover, Eric’s tabletop performance – which included audience members in the act - was flawless. Against large, extravagantly visual escapes and illusions, his style of close-up magic was likely too low key. The winner of the episode, based on the magicians scoring each other’s acts, was the French illusionist Xavier Mortimer.

The only part of Eric in this independent film is his hands. The main character is a young street magician trying to support his younger sister after the deaths of their parents. When you see a close-up magic trick on the screen and don’t see actor Jacob Latimore’s face in the shot, there’s a good chance you’re looking at the work of Eric Jones. If you want to check it out, just remember the film is rated-R for language, drug content, and violence.

In fact, if show creator Simon Cowell had his way, Eric wouldn’t have made it past the live audition when he appeared to teleport a coin from his hand to judge Mel B’s hand. Fortunately for Jones, Cowell’s three co-judges, Heidi Klum, Howie Mandel and Mel B, disagreed with Simon and Eric got a second chance to impress the stern English judge.

During episode seven, the Judge Cuts according to the show’s format, Eric performed an illusion that involved disappearing a card signed by one of the judges and having it reappear inside Simon Cowell’s buzzer. The illusion was particularly dramatic since Jones used a hammer to shatter the button. A symbol of Cowell’s initial rejection of him on the show. The drama played well and helped Eric move on to the show’s Quarterfinals

During the Quarterfinal round, Jones stepped up to bigger illusions with a large pane of glass on the stage.

He made a signed card seem to move through the glass with the help of judge Howie Mandel. For the finale of his act, he concealed the glass and appeared to step through it himself. This larger-scale illusion moved him out of the Quarterfinals of the show and into the top twelve as he proceeded to the Semifinals.

For the Semifinal round, Eric Jones did a series of tricks that played to his strength as a close-up magician. He appeared to transform a bill into four coins, then subsequently made the coins seem to disappear one at a time while involving every judge in the trick. He then finished by making the coins reappear under an untouched bill. And then appeared to convert them back into the bill he started with.

However, there were a few gaffes in the performance. One is notably calling one judge by another judge’s name. Eric was eliminated after the semifinal round, so this was his final performance on America’s Got Talent.

CW network’s Masters of Illusion is a reality designed to showcase top magicians from around the globe. The show is performed in front of a live audience and promises no camera tricks or CGI. What the viewers see at home is what the live audience sees.

Eric Jones appeared on the show for the season four finale, filmed shortly after his stint on America’s Got Talent.

The Grandmaster Asia – Part One

In what probably felt like a nice change of pace after being a contestant on so many shows, Eric Jones was one of four judges on Indonesia’s SCTV show The Grandmaster Asia – Part One. They filmed for several days in November 2017 and Jones’ episodes began on December 1, 2017.

A Man to Watch

Finally, Eric Jones is a star on the rise in the modern magic world. This is indicated by his increasingly public presence on stages and television screens all over the world. For close-up magic, his is a name to know.

Practical Jinn Magick: Rituals to Unleash the...
Buy on Amazon

The Elements of Spellcrafting: 21 Keys to...
Buy on Amazon

Modern Magick: Twelve Lessons in the High Magickal...
Buy on Amazon
This website uses cookies to ensure you get the best experience on our website. Learn more.