Spotlight: The Magic of Tommy Wonder The man from Amsterdam took the stage. Nobody knew who this magician was, even less knew what he would do.

As he was introduced as Jos Bema, a name that did little to wow the audience, the murmurs in the crowd faded into the shadows as anticipation took over.

He wasn’t on the stage for long, but then, he didn’t need to be.

Within just about ten minutes, the mysterious man performed three routines, each more brilliant than the next.

And as he finished, the crowd rose to their feet in unison, delivering a rousing ovation worthy of the world’s best magicians.

Sometime after, that man changed his name to Tommy Wonder.

From there, everyone in the industry knew his name, as he went on to become legendary, reaching global recognition as one of the greatest magicians of his time before his passing in the early 21st century.

With an extensive repertoire that was not only his own original work, he forged a reputation for groundbreaking performances, both as a stage magician and also in close-up performances. The 3 Pillars of Magic

He even went on to write a popular book, The Books of Wonder, which comprised two volumes and was published in 1996 to much acclaim by fellow magicians and fans.

Tommy was many things, but more than most, he was an artistic genius. Among his highly-advanced skillset were, what he coined as, “the three pillars of magic:” A perfectionist who was highly focused on his personal ideals about what magic was, Tommy grew a fanbase that loved to watch him at work.

So much so, in fact, that at the inaugural 31 Faces North conference in Toronto, Tommy was invited to be the guest of honor.

During a little performance, he stopped on stage, pausing to confirm whether he should be doing magic or simply giving a lecture. He asked the crowd if they wanted him to explain what he is doing.

Without hesitation, the audience, which was full of elite magicians and accomplished intellectuals protested together – “No! Don’t explain anything! Just keep performing!”

Nobody wanted the secrets. They just wanted to enjoy the experience.

All they needed was the magic of Tommy Wonder.

From Holland to Hollywood

Born in the Netherlands on November 29th, 1953, Jacobus Maria Bemelman took up an interest in magic in his early years. The young Dutch boy studied at an esteemed Performance Academy in The Hague, a city on the Western coast of his homeland.

There, he was immersed in acting, singing, and dancing – all of which he studied for three years, finding comfort and confidence on the stage.

After his time at the academy, he then went on tour for two years with De Haagsche Comedie, before breaking away to chase his dream of being a stage magician.

Going through several stage names, Bemelman settled on Tommy Wonder, a moniker which would soon be recognized throughout the wider magician community.

The Dutch master performed around the globe, taking stages from Las Vegas to Monte Carlo, and also rising to make several appearances on television.

At the age of 26, he grabbed the runner-up prize in the World Championships of Magic, and 9 years later, in 1988, he came second again.

Rising high amongst his peers, Tommy was honored to receive Performer Fellowship Award in 1998 from the Academy of Magical Arts in Hollywood. The following year, the World Magic Awards proclaimed him as the Best Sleight of Hand Performer.

Highly respected for creating his own repertoire, The Books of Wonder he published in 1996 became highly acclaimed, giving the world unique insights into the brilliance of this magician’s mind.

Aside from the books, his works are widely available on multiple websites, retailing at bargain prices.

The Best Magic of Tommy Wonder

Tommy Wonder is a highly-respected magician, with the awards and accolade he received during his lifetime serving testament to his abilities.

Here are some of his most well-known and loved works:​​​​ 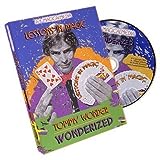 If you were to only watch one DVD of this magician, then make it this one.

Packed inside a running time of just over 80 minutes, this broadcast-quality production is loaded with some of the very best gems from Tommy Wonder.

In this performance, you’ll find a number of great tricks, including: 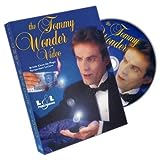 When one of the greatest magical thinkers on the planet was invited to the British Close-Up Magic Symposium, it was bound to be a special occasion. This DVD was shot with two high-quality broadcast cameras, giving a close-up view of his most fantastic illusions.

Check it out to marvel at the following acts:

3. The Books of Wonder

The Books of Wonder
Buy on Amazon

Comprising two volumes, Tommy Wonder’s manifesto on the art of magic delves deep into theater and psychology, offering an insight into the workings of his wonderful mind.

With a variety of essays, routines, and tricks, Tommy lays down the blueprint for aspiring magicians to follow, whether they are interested in close-up, stage performance, or walk-arounds.

You don’t need to have been in magic long to know who Tommy Wonder was. While you may be too young to have had the good fortune of seeing the man in a live performance, you can still learn some great lessons from him in the Visions of Wonder series.

This is possibly the most comprehensive collection of footage that exists of arguably the best magician of our generation. Any upcoming magician with big ambitions should snap this one up.

With a variety performance of cabaret, stage and close-up, you can get a solid grasp on his style and presentation, seeing just how good it is in all genres.

Learning these incredible tricks might be your primary reason for watching, however, you should also take note of his commanding and captivating performance and presentation.

Furthermore, Tommy gives us the inside scoop on how he came up with his incredible, original illusions and acts, detailing how they came to be the masterpieces we see on stage. Not only will they astound and inspire, but some explanations will leave you laughing with joy because of just how ingenious they are.

If you want to see the most fantastic wild card routine ever, look no further than Tommy’s performance of “The Tamed Card.”

By the end of this set, you’ll have taken course in magic from one of the best ever, allowing you to become a better magician.

This routine is a well-known one, and there’s hardly a magician alive who hasn’t got a version of their own. Unlike the rest, however, this routine is viewed by many as one of the greatest cup and ball routines of all-time.

With a simple method and structure, Tommy utilizes great misdirection and more to fool his audience, leaving them helpless to do little more than smile.

Unfortunately, this DVD footage is far from perfect, with grainy quality and poor subtitle programming taking somewhat from the show.

The Death of a Great Magician

To the shock and dismay of the magician’s world and his fans, Tommy Wonder died in June 2006, after a short battle with lung cancer, aged just 52.

Gone at such a young age, Tommy surely had many more years at the top, but unfortunately, we weren’t lucky enough to see any more from the marvelous man.

Shortly after his passing, in August 2006, Tommy was posthumously honored with the Theory & Philosophy Award, which was presented in Stockholm, at the FISM World Championships of Magic.

Tommy Wonder stood tall among his peers, ahead of his time in more ways than one. Just like a chess Grand Master, the Dutch wizard was many moves ahead of everyone else. Every move of every trick, every performance on every stage, he had planned and practiced the routines to perfection.

This artistic genius combined skill and elegance with masterful performance abilities, leaving you believing it was truly magic.

Our Take on the Magic of Tommy Wonder

He may be gone, but his magic is still alive and well.

Unfortunately, some of the products available online aren’t of the best quality in regard to visual production or audio quality.

While that’s a bit of a shame, it’s no reason to overlook Tommy Wonder. That would be a serious mistake for any fan of magic or aspiring magician.

This man died early, leaving a hole behind, as well as a fantastic legacy that continues to inspire and awe people years after his passing.

His vast repertoire of original creations and diverse range of acts demonstrate the passion and dedication Tommy Wonder had for the art of magic. He was nothing short of a genius and is one that we can all learn from. Even if you have only a mild interest in magic, his performances will engage and entertain you like few other magicians can.

Get your hands on a copy of Wonderized to start off. You’ll not regret it.