Dynamo does a lot of cool tricks with an iPhone, and one of the most popular ones is the one where he twists the iPhone in half. He takes a regular phone, holds it in his hands, and then twists the bottom part right in front of the spectators.

This is what it looks like when he twists it:

Seriously, it looks surreal when you see it live and up close.

Remember, he does this with someone else’s phone so that there can be no suspicion of him using a prepared prop phone.

He then twists it back into place, and hands it back to the owner.

So how is this done?

The trick is actually really simple to do, and a prop is involved. He obviously is not actually flipping the phone in half.

The secret is this:

He holds it in his left hand. Watch his left hand before he does the trick and you can see him getting it ready and concealing it.

After he takes the phone from the spectator, he adjusts it into place. 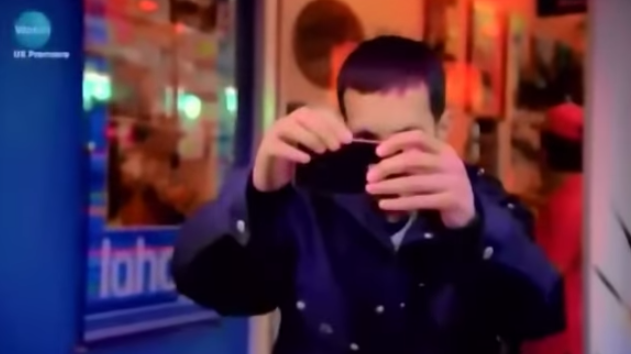 He uses a small strip of double sided tape and sticks it on the front of the spectator’s phone. Nobody can see him doing it because they are standing in front of him.

Then, all he has to do is flip over the entire phone. The top half will be covered with his own prepared half that he taped on, and the bottom half will show the spectators screen.

To the audience, it looks like he is only twisting the bottom.

Then, to turn it back into place, he again makes a twisting motion but flips the entire phone again.

After that, all that’s left is concealing and removing the prop half that was taped. He slides it into his right hand as he presents the phone and then conceals it in his hand as he hands it back.

Watch Dynamo performing the trick and a full revealing video

TIP: Before you flip over the phone, make sure to turn on the spectators lock screen. That makes the trick even more impressive because they can see that it’s their own lock screen.