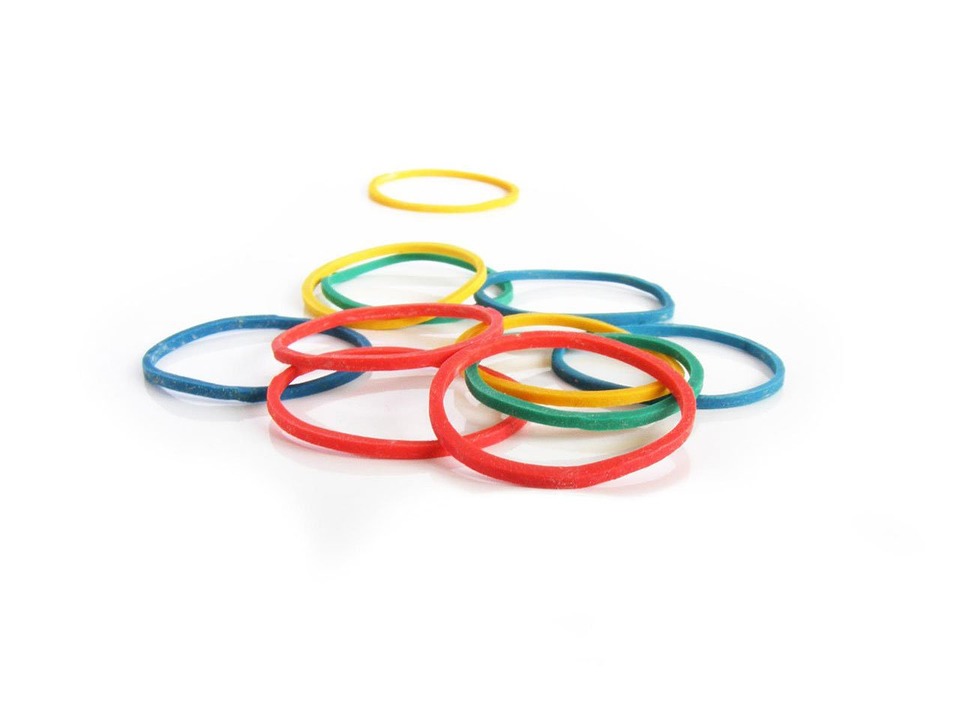 Need some simple rubber band tricks to add to your magic act? There is a lot to research and learn, so we have narrowed it down to five different choices for you.

Rubber bands are a fantastic, easy, elastic tool to use in your act. These bands are extremely thin and flexible, making them perfect for practice and impressing your audience. They are also a great type of trick for parties and small events where you don’t want to bring bigger and more complicated props.

These tricks are all relatively simple, but all have the potential to really wow your audience. We will also go over step-by-step instructions for perfecting them, so you will have no issues pulling them off when the time comes.

The Rubber Band Through the Thumb Trick

For this first trick, you will simply need one rubber band. It is recommended that you use a brightly colored one so that the effect is more obvious for your audience. Yellow, red, blue and green will be the easiest ones to see.

Practice these few steps slowly many times to get the hang of it, and after some time, it will be much easier to do the trick quickly and efficiently. It will take some effort to perfect this, but once you do, it will look like the rubber band has gone around your thumb twice. The end result looks great and will leave your audience in awe.

Once you have perfected the previous steps, you will be able to slowly pull the rubber band to make the knot slip – this will make it look like the rubber band has gone directly through your thumb. Here’s a video that gives you a fantastic visual.

This is one of the most famous and well-known tricks you can attempt. Your audience will really enjoy this trick.

To begin, you will need any rubber band. Then hold your hands in front of you and wrap one band around your pinky and ring finger, letting it rest at the base of your fingers. With your other hand, stretch the elastic band and insert the tips of your pinky, ring finger, middle finger, and pointer finger into the loop.

Keep them inside the loop against the palm of your hand in a position that allows the band to be held by all four fingers, but in two different ways. The pinky and ring finger will hold in near the tips and your middle finger and pointer finger hold the band by inserting it into the loop. Once you have done this, you should be able to easily open or straighten your fingers, which will automatically make the band jump onto your middle and pointer fingers.

Practice definitely makes perfect with this trick. Keep attempting it until you can do it easily. 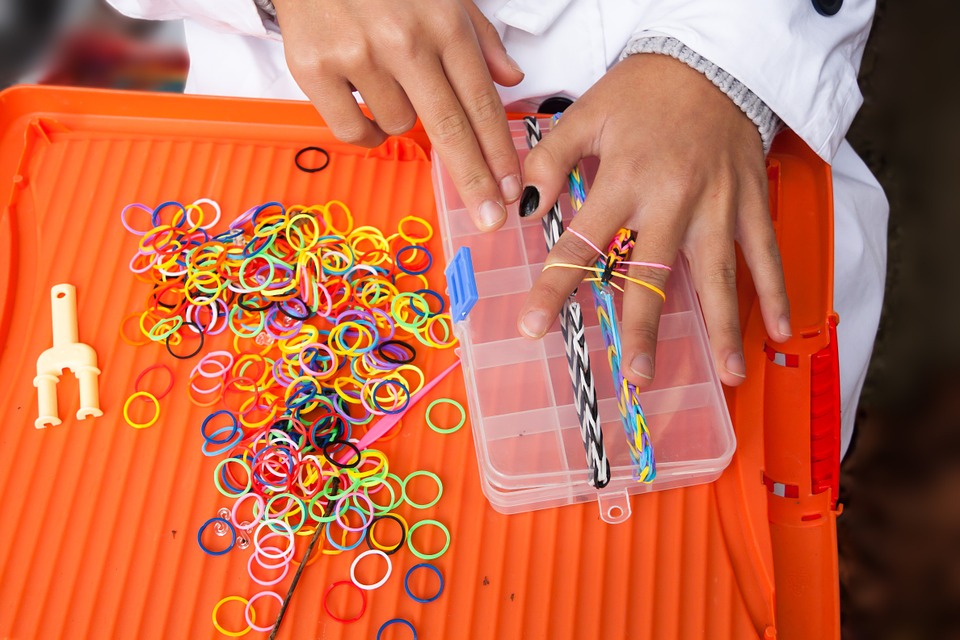 This is a variation of the last trick we looked at, but it is a little more intricate and can be confusing while you learn it. Once you have practiced it many times, you will be able to do it quickly, making it look really neat for your viewers.

This trick will require two different rubber bands of two different colors. Just like the first step of the last trick, you will hold your hands out in front of you with the backs facing your audience. Then you will insert the first band onto your pinky and ring finger until it reaches the base of the two of them.

At this point, you should put your thumb in the loop and close your wrist in order to put the first rubber band on your middle and pointer finger. This allows you to switch the first band from the first position to the second, even when the second rubber band is encased around four of your fingers.

This one will take a lot of practice, but once you master it, the trick will become a crowd favorite. 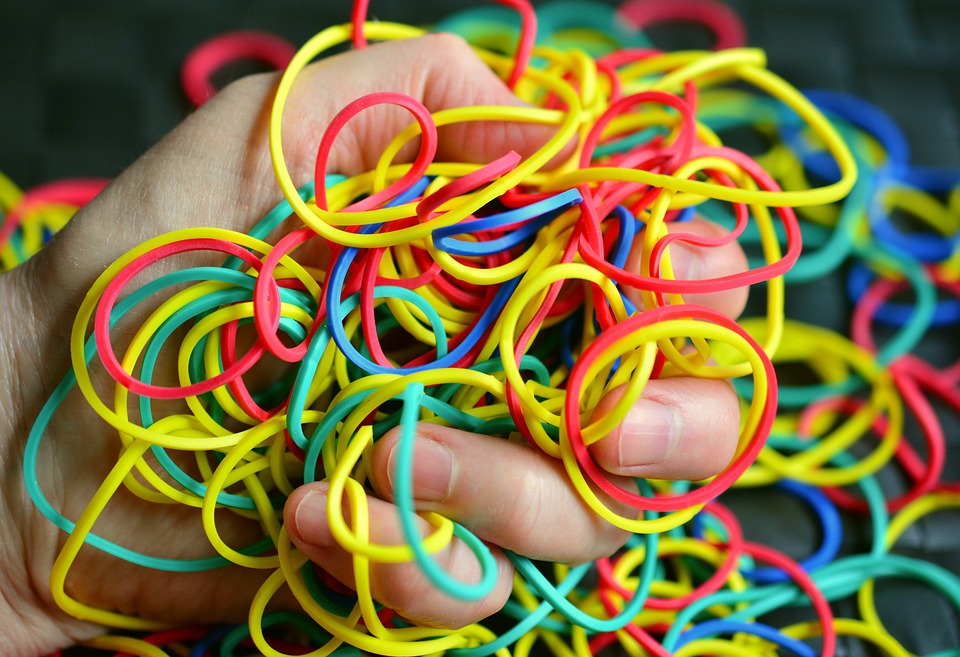 The Rising Ring rubber band trick is fairly simple to master and wow your spectators with.

First, thread the ring you are using onto a broken rubber band. As you hold onto the band, allow a large length of the band to accumulate in the hand that the ring is sliding away from.

Once you have the ring and the rubber band in place, pull the band tight and rotate it at a slight incline. Make sure that the ring is resting on the lower part of the band, pull it taut and very slowly release the extra band that is in your left hand. The rubber band will come out slowly and carry the ring with it, creating the illusion that the ring is rising. The band is, in reality, the part that is moving.

This will take a lot of practice to master, but once you have it down, you will be able to do it in your sleep. One tip that will make it easier to pull off the illusion is standing a little further away than you normally would from your audience so that they do not see the rubber band slowly moving. This forces them to focus on the ring, making the trick more real to them.

This trick while requires a deck of cards in addition to a medium rubber band. Put the rubber band around your wrist until it is needed later in the process. For this trick, it is better to use a nice thick band, as it is helpful for the illusion.

Then completely release the deck and allow the rubber band to spin the deck – this will allow the spectator’s card to be thrown back to them.

For this particular trick, you are going to want a variety of different rubber bands on your wrist.

You will take one of them and give it a twist. Then you will pinch between your hands so it looks like you have a rubber band between your fingers. Basically, it goes around the wrist, and it vanishes when you let go of it.

This trick is simple but will have a great effect on your audience. You are basically taking a rubber band off your wrist, letting it go, and letting those watching believe that it has disappeared. Want a visual of this trick? Here’s a great video example.

Now that you have all the tricks that you need to dazzle your audience, it’s time to start adding these tricks to your magic act. Sprinkling the different rubber band tricks throughout your show is a great way to break up the regular tricks you have already been performing, and it gives the audience something short and fun to observe between longer and more complicated tricks.

These are also great ones to try at parties or among a small group of friends, as they mostly don’t require any props besides a few rubber bands. People of all ages and even small children will love to watch you perform these simple tricks.

How to Make and Use the Invisible Deck